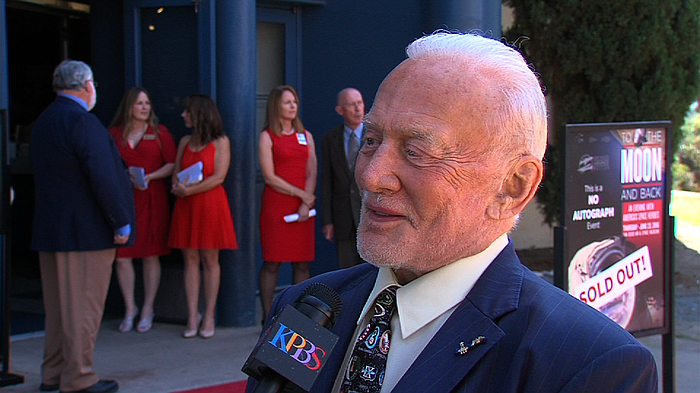 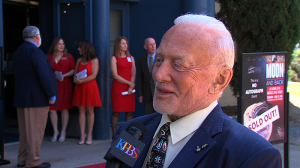 Four Apollo astronauts and three flight directors visited the San Diego Air and Space Museum Thursday night to talk about NASA’s moon-walking missions that put them in the history books.

Astronaut Edwin
NASA
Astronaut Edwin “Buzz” Aldrin poses for a photograph beside the United States flag on the moon, July 20, 1969. Astronaut Neil A. Armstrong took this picture with a 70mm Hasselblad lunar surface camera.
Three Apollo flight directors also were there to recount their mission memories: Gerry Griffin, Apollo 12, 15 and 17 (and a key figure in resolving the Apollo 13 crisis), Glynn Lunney, Apollo 13, and Milt Winder, who also served as a flight director during Apollo 13.

It was 47 years ago that Aldrin and his crew mate, the late Neil Armstrong, were the first to put their footprints on the moon, 239,000 miles from Earth.

“It was the culmination of a long effort and being in the right place at the right time,” Aldrin told KPBS. “I wouldn’t trade anything for the opportunities that have opened up.”

Five more Apollo missions followed. Gene Cernan of Apollo 17, was the last person to walk on the lunar surface, on December 1972.

Aldrin has vivid memories of that Sunday when he stepped off of the spacecraft, climbed down the ladder, and walked on the moon. He hopes to inspire the next generation of astronauts and scientists to soar to new heights.

“Get fired up about an exciting future,” Aldrin said.

Many people at the museum were alive in 1969 and remembered exactly where they were on that historic day when the Apollo 11 astronauts set foot on the moon. The museum event is likely another experience that will make a lasting imprint.