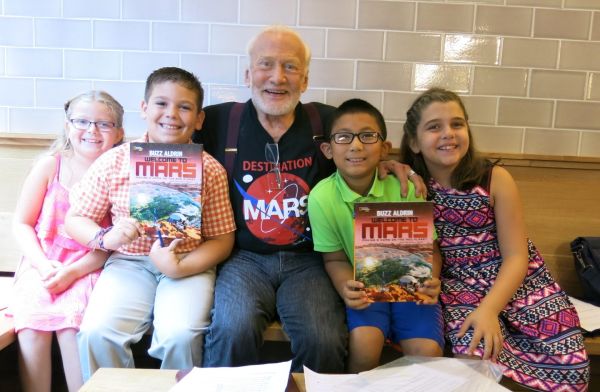 We met former astronaut and author Buzz Aldrin when he was in Manhattan recently. His latest book, “Mission to Mars: My Vision for Space Exploration,” by Buzz Aldrin and Leonard David (National Geographic Society) is a must-read for anyone interested in outer space.

How did you get the idea to make a book out of Mars?
I was fascinated with Earth-moon cycling orbits for tourists to swing by the back side of the moon or the front side, and then I discovered that NASA was not interested unless we landed people on the moon. So I began to look at Mars to have this place swing by the Earth, five months later swing by Mars and then come back to the earth in 21 months. Five and 21 is 26. That is the time that Earth catches up to Mars.

Were you scared being on the moon?
Me? scared? I’m a fighter pilot. We don’t get scared. We don’t have fear. We execute, we have ice in our veins. We’re not allowed to be scared because fear clouds up your thinking. Fear is not good.

It cost millions of dollars to get to the moon. Did you have to pay anything?
NASA had to use all their money to build rockets. So the airports paid me — not very much.

Is there any hint that there is life on Mars today?
We haven’t found life yet on Mars. We hope to dig down deep. But the Mars generation, you guys, hopefully will find life on Mars.

Do you still want to go into space again?
No. I’m a scuba diver. I am more important down here because of my experience to help the Mars generation.
How many miles to the gallon does a rocket ship get?
When the rocket lifted off, somebody calculated not with a slide rule, but with a computer, 7 inches to the gallon. Automobiles would never sell if that’s all they did. You wouldn’t go very far. If you had a 10-gallon tank.

Did you stop believing in Martians?
Live ones? No.
How did you feel being weightless?
Because you can be very much like weightless in the ocean or the swimming pool just dropped out a little bit and you’ll stay where you are and that’s just like. It’s not really zero gravity because it’s gravity that keeps the moon going around the Earth. So it is unaccelerated. You’re in a car going 50 miles an hour, you push the pedal down, accelerate to 60.

Do people know who you are while walking down the street?
Yes and no. I like to be private. And that’s not why I grew a beard. I did that to be cool.

How does it feel to be the real Buzz Lightyear?
Buzz Lightyear is better than Lunar Larry. So the producer changed it to Buzz. It is cool.

When do you think it will happen, like 100 years?

How do you feel about your accomplishment to be the second person to walk on the moon?
Well, I was on “The Simpsons,” and Bart said, second comes after first. We both landed with great teamwork and that was most important. Either one could go down the ladder, but the symbol of the commander being the first, we never had two people outside the spacecraft before. The commander’s the symbol of the Eagle spacecraft, that was our name, the symbol of our country. We were the third mission to go to the moon.

Were you allowed to keep any souvenirs from space? If so, what were they?
In the lander Eagle, there was a water gun, and we used the water gun to put water into the food that was dehydrated. And so we put water in there and then it would taste good. So we would squeeze it in our mouth. We’re much better now, TV dinners. So I have a water gun. Now I also have a broken circuit breaker that I found on the floor and the circuit breaker was an engine arm. That’s the one that has to be in to land to go home, but if it’s broken I had to use a pen. So I have the pen and broken circuit breaker.