Buzz Aldrin: Get to Mars within 20 years

07 May Buzz Aldrin: Get to Mars within 20 years

By Buzz Aldrin, Special to CNN

Editor’s note: Buzz Aldrin, best known for his Apollo 11 moonwalk, holds a doctoral degree in astronautics and, at the age of 83, continues to wield influence as an international advocate of space science and planetary exploration. Aldrin’s new book “Mission to Mars: My Vision for Space Exploration,” co-authored with space journalist Leonard David, is a blueprint and strategy for American-led presence of human beings from Earth on the Red Planet Mars. He is on Twitter at @therealbuzz.

We need to get the world excited again about space exploration and have the pioneering spirit to reach beyond our boundaries and current capabilities.

I want a new generation of space explorers to feel as I did when it was my privilege to take part in the Apollo program that landed the first humans on the surface of the Moon. This is important, not only for the USA but for the rest of the world.

Let me tell you why.

The dream of space travel has been a lure of humankind for centuries – to reach for the moon and even the stars.

But it wasn’t until the 20th Century that man took his first powered flight. It was in 1903 on a windy morning over the sands of Kitty Hawk that the Wright Brothers’ Flyer took their first flight, defying gravity. My mother, Marion Moon, was born that same year.

Just 66 years later, Neil Armstrong and I stepped onto the moon’s magnificent desolation, fulfilling the dreams of millions. But it has been over four decades since we walked on the lunar surface and in my view, with too little progress to show for it.

I have always felt Mars should be the next destination following our landings on the moon. I’ve been very vocal about this for a long time. Today the dream of reaching the red planet looks like it is finally getting closer to becoming a reality.

Thanks to NASA’s Curiosity rover, as well as the spunky Opportunity rover, both now operating on the Martian landscape, these robots are revealing to us more than ever before details about the planet that is more Earth-like than any we have discovered thus far. And with each image relayed back to Earth, every measurement taken, there’s a growing familiarity with distant Mars.

For me, as well as other onlookers, those early color images beamed back from the Curiosity rover showed layered buttes and other features suggestive of the southwestern United States. I’m hoping that familiarity of another world will pique the curiosity of the young people of the world into the idea of exploring beyond Earth, our moon and on to Mars.

In my mind, there is an evolving comfort level with Mars, and it’s a perspective that summons us to push forward. The challenge ahead is epic, but historic. We are on a pathway to homestead the red planet.

What we’ve done on Mars and what’s next

Obviously I am passionate about forging our future in space. People ask me all the time – why do we need to go to Mars or why do we even need a space program?

Because we feel good about ourselves and the future of our country and by venturing into space we improve life for everyone here on Earth. The scientific advancements and innovations that come from this type of research create products and technology that we use in our daily lives and provide even more convenience to people all over the world every day.

So how do we get people excited about space again? And the big question is how do we get there? We need a plan. We also need a leader in the world to state a public goal with a specific time line.

There’s a window of opportunity ahead for a bold, Kennedy-like proclamation that placed the nation in the 1960s on a moon-bound trajectory: “I believe this nation should commit itself, within two decades, to commencing American permanence on the planet Mars.” 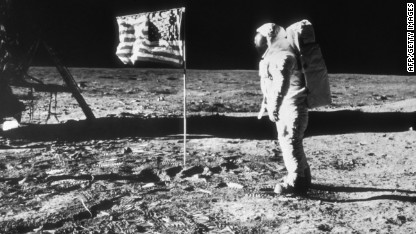 Buzz Aldrin was the second man to walk on the moon. Here he is in 1969.

We’re talking about multiple missions of adventurers to eventually settle and colonize Mars. To succeed at Mars, you cannot stop with several one-shot forays to its surface.

Years ago I devised a method with cycling orbits of spacecraft on continuous trajectories between the Earth and Mars. By using interplanetary cyclers, I feel, and other space experts agree with me, this is the most economical transportation system concept between the Earth and Mars. Using this capability, I believe the timeline of crewed missions to Mars is between 2035-2040.

So how do we accomplish this?

First, the U.S. needs to continue to be the human space transportation leader. I think we should capitalize on the dynamism of the commercial market to develop a runway landing system that can truly become the basis for the U.S. highway to space.

Second, I worry that we may be caught in an unproductive race to replant U.S. taxpayer-supported footprints on the moon. We should be using the lunar program to accomplish foreign policy goals. So let’s focus on cooperation with our international partners.

Thirdly, and most importantly, we should direct the focus of NASA efforts on establishing a permanent human presence on Mars by the 2030 to 2040 decade.

I firmly believe that accomplishing these three goals will do more to advance U.S. national interests than any other policy initiative we could envision. We have, or can affordably develop the technology, to send humans on various missions towards Mars and especially its two Martian moons.

To reach beyond low Earth orbit requires a progressive suite of missions that are the vital underpinnings – a foundation – for a unified space vision. Putting in place and staying on track with a unified approach to space program activities must begin now.

Now orbiting Earth is the international space station – which is needed to conduct the vital in space research to safely send humans to Mars. We must use our station know-how to prototype specialized safe-haven, interplanetary, and taxi modules.

By implementing a step-by-step vision – just as we did with the single-seater Mercury capsule and two-person Gemini spacecraft that made Apollo possible – we can journey further and further outward.

With each step of this plan, whether it’s the utilization of the ISS for exploration, or our first visits to a truly extraterrestrial body, this vision will captivate the imagination of the entire globe.

We have worked on many of the technologies we need, let’s focus our efforts to mature the capabilities we need to successfully execute this bold mission and to support a Martian settlement. There is really very little new science required. So the question is whether we invest the tens to hundreds of billions of dollars the U.S. will spend on human spaceflight into a return to the moon, or do we invest in a fundamental transition of the human condition.

We are at an inflection point. We can choose to do what is easy, what is safe. Or we can choose to make a difference. The choice to me is absolutely clear. There is no other choice than to commit to Mars.

Humans need to explore, to push beyond current limits, just like we did nearly 44 years ago that enabled me to stand at Tranquility Base on the moon. In reaching outward with method and intent to Mars, America is once again in the business of a vital, meaningful and future-focused space exploration program.