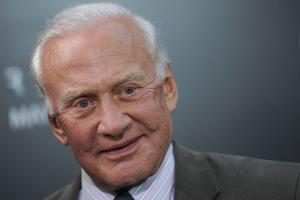 When I was a teenager I had decided my academic performance was good. Because of my father’s aviation pioneering from 1919 to World War II I wanted to fly airplanes, and the best way to do that in 1945 seemed to be through the military academy. I graduated third in my class from West Point during the Korean War so, when I completed pilot training, I was sent to Korea for air combat. I flew 66 missions and shot down two aircraft.

I was quite immature socially when I was 16. I wasn’t shy but I wasn’t a ladies man in high school. My father was a role model because of what he had done but not because he cultivated a relationship with his son. He wasn’t too good at that. When he was away during the war my mother and my two older sisters were dominant in the house. I think I was close to my mother. She went to my football games.

I wasn’t immediately taken with the idea of space travel. I was in Germany flying supersonic F100s in 1957, the year of Sputnik. We were on nuclear alert in case the Soviet Union invaded Europe. Sputnik going over our heads – neek-neek-neek – was not of much interest. But in 1959, Life magazine showed pictures of the Mercury spacecraft and talked about selecting the first astronauts. I hadn’t trained as a test pilot so I didn’t think I’d be eligible. But in 1963 Nasa relaxed the requirements and focused more on academic achievements, which put me near the top of the list.

It was a combination of unforeseen changes and tragedies that opened up opportunities for me and Neil Armstrong to walk on the Moon. I wasn’t scheduled to fly in the [preparatory] Gemini programme but an accident that killed two astronauts moved me on there. I was then involved in a very successful space-walking mission so I knew I was in a good position. After the Apollo 1 fire in 1967 that killed three astronauts, including my friend Ed White, the shuffling around resulted in me, along with Neil Armstrong, being assigned to the Apollo 11 mission.

Apollo was probably the most intensely trained-for mission. We had an hour-by-hour timeline. I think we felt very confident about it. I had been in combat in 1953 and dealing with emergencies was common. You learned to accept what may happen or you got into another business. We knew we might be prevented from successfully landing but we thought we’d still be able to abort and get back to Earth. We thought we had about a 60 per cent chance of landing but over a 90 per cent chance of coming back safely even if we didn’t land.

Each flight designs their own symbolic patch. I was interested in finding something special and symbolic about humans going to land on the Moon for the first time. I couldn’t come up with something individual but we finally came up with the idea of using the symbol of our country, the eagle, looking ready to land on the Moon, with an image of Earth behind it. It was suggested the eagle carry an olive branch in his beak, an image of peace. But that was rejected because it looked too aggressive, with the open claws of the eagle reaching out for the Moon. So we put the olive branch in its claws and that’s how the badge ended up. And, of course, Neil and I agreed that we would name the spacecraft Eagle.

I felt if we landed successfully I wanted to do something personal and symbolic of giving thanks. I was given permission to serve myself Communion, with wine and a wafer, on the surface on the Moon. But I was advised not to say anything about it at the time. Someone had strongly objected to the Apollo 8 crew reading from the Bible. We didn’t want to get into any further trouble with the religious critics.

If we could do it all again, I think, as I came down onto the surface, our training would have been more equal if I’d been in charge of the experiments on the lunar surface. That wasn’t made clear and because Neil was down there first he assumed control of what we did. For some biological reason the first thing I did at the bottom of the ladder was to urinate into my spacesuit. Then I looked out and I heard Neil use the word “beautiful” and that created in me the feeling that it wasn’t beautiful. I called it “magnificent desolation”. I thought about how what I was looking at hadn’t changed for thousands of years.

I did do something first. I was first back into the cabin, so I actually became the first alien to climb into a spacecraft back to our home planet, Earth. Mind you, if I could go back I’d remind myself to turn on the camera as we left – I forgot, so we don’t have any pictures of the lift-off from the Moon.

I might advise my younger self to plan something appropriate to keep me busy after I retired. After the moon landing I felt at first there might not be anything as great I could do again. That’s why I decided to become the first astronaut to return to military service. I wanted to be made a commandant of cadets at the academy but I didn’t get that assignment; a man who was the son of a four-star chief of staff in the airforce got it, and I was made commandant of test pilots – which was peculiar because I’d never trained as a test pilot. It wasn’t what I wanted so, after a year, I retired and had no specific job to do. That’s when I became depressed and an alcoholic. I faced a similar thing two years ago, when I got divorced from my third wife, but having now gone 34 years without drinking, I know a bit better how to deal with depression.

I don’t really have regrets but maybe the depression and the alcoholism didn’t need to interrupt my first marriage. But it did and I had to live with that. I loved very much my first wife and my three children. But I’ve been married three times and I’m divorced now. Maybe I could have been a bit more selective but I did what I did. I remember some of what my children were like when they were very young. I’m very proud of my youngest son, who has a PhD and speaks Russian and is vice president of a rocket company. I’m working through some troubles with the eldest son, trying to help him make some changes in his life. My daughter is the only one who has a child. Thanks to him I’m a great grandfather now.

I’m not particularly inclined to want to be a lonely pioneer at another planet. I think we absolutely need to send humans to permanently occupy Mars but I don’t think my inherited characteristics would make me a good volunteer. I wouldn’t have made a very good long distance runner.

In 1946, the year Buzz Aldrin turns 16… London Heathrow Airport officially opens for civilian use… George W Bush, who would become the 43rd president of the US, is born… Mensa International formed…