Buzz Aldrin: JFK originally aimed for Mars, not the moon 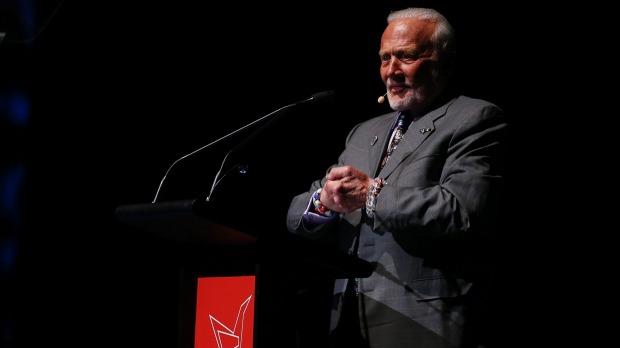 President John F Kennedy’s famous moon speech could well have been a Mars speech had he not been talked down from his lofty ambitions, Buzz Aldrin revealed in Brisbane on Wednesday.
And the second human being to ever step on the surface of another world urged the United States to work closely with the Chinese in space to help promote peace on Earth.
Speaking at a superannuation conference in Brisbane, Dr Aldrin said he only recently learnt about President Kennedy’s belief his nation could launch a Mars mission in the 1960s.

“(NASA) told him it would take at least 15 years before we could put a man on the moon,” he said.
Advertisement

“Now, I recently learnt at MIT (the Massachusetts Institute of Technology) at the 100th anniversary of the aero/astro school department, that Kennedy had actually wanted us to go to Mars.
“He asked his engineers to figure it out and, after a weekend of rather intense calculations, they told him that Mars was just a little bit too far to go, but we could shoot for the moon as a more realistic goal.
Buzz Aldrin in one of history’s most iconic photographs.
Buzz Aldrin in one of history’s most iconic photographs. Photo: Neil Armstrong
“Can you imagine having only one weekend to figure that out for the president?”
Dr Aldrin and Neil Armstrong landed on the moon while Mike Collins remained in lunar orbit aboard the command module on July 20, 1969, eight years after President Kennedy’s address to the US congress that set the agenda for the Apollo missions.
“Instead of accepting what was possible, on May 25 1961, just three weeks after Alan Shepherd’s flight [when he became the first American in space during a suborbital flight], President Kennedy boldly challenged America to commit to the goal of landing man on the moon before the end of the decade and bringing him back – that’s a good thing,” he said.
“We had not even put a man into orbit. The rockets and spacecraft needed to go beyond Earth’s orbit didn’t exist.
“Many thought the challenge to be impossible. We didn’t have the know-how, but we did have a leader with the vision, the determination and the courage – and the confidence – that we could get there.
“By publicly stating our goal, putting a specific time period on a very specific achievement, President Kennedy gave us no way to back out.”

Dr Aldrin said President Barack Obama could take his own giant leap forward for mankind by setting out his own goals for the exploration of Mars.
“By venturing into space, we improve life for everyone here on Earth,” he said.
Dr Aldrin lamented the decline of American manned missions and urged greater cooperation with China’s burgeoning space program.
“We really should work with them in space and I believe that will help down here,” he said.
“It’s almost a must and I think it’s quite important that this (Obama) administration doesn’t have a guaranteed great legacy; things may not work out the way they think they will.
“But if they were to just open the door a little bit, to relations with China and space, someone else will make it work and they will get credit for it.”

Read the original article at The Sydney Morning Herald