Buzz Aldrin lays out his plan for space exploration

17 Oct Buzz Aldrin lays out his plan for space exploration 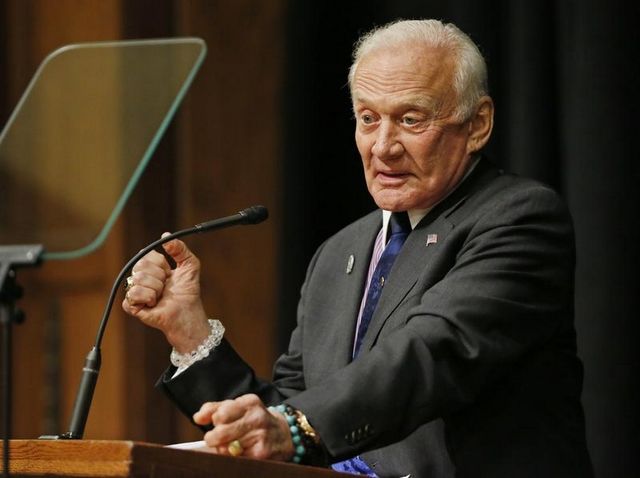 Buzz Aldrin, the astronaut who walked on the moon with Neil Armstrong, discusses his plan for the future of space exploration Wednesday in the South Ballroom of the Purdue Memorial Union. / John Terhune/Journal & Courier

Buzz Aldrin wants to see the public get excited about space exploration again.

It’s critical, actually, if the Apollo astronaut is to accomplish his goal of a permanent human settlement on Mars in the next two decades or so.

The recent success of the movie blockbuster “Gravity” is a good start, Aldrin told a packed house Wednesday at Purdue University’s Memorial Union Ballroom, which was filled with students, faculty, staff and the public who wanted a glimpse into Aldrin’s vision for the future of space exploration.

“The fact that so many people are talking about the movie — a space movie — shows that people are still fascinated, and we need to capitalize on that interest,” said Aldrin, who was the second man to walk on the moon. “To some, this (plan) may sound like science fiction, but that’s what people thought when people said we’re going to go to the moon.”

Aldrin said he’s not encouraged by what he described as a shortsighted political environment and lack of a unified purpose in Washington, D.C., being able to turn his Mars vision into reality.

“President (John F.) Kennedy gave us no back door,” Aldrin said. “I believe a future leader could have the vision, the determination and the courage to make this commitment again. … I think the president needs to clarify his objective for the remaining time in his second term. That’s expected by the people.”

During his talk, called “Buzz Aldrin’s Unified Space Vision,” Aldrin said a new pool of talent trained in STEM fields — or science, technology, engineering and math — will be critical for the U.S. to achieve before it becomes cutting-edge in space exploration again.

“What we’re doing is not just for geeks,” Aldrin said. “Every country needs a STEM workforce. … We’re not there right now, but I believe space provides a unique opportunity to get our children interested in these geek subjects again.”

While Aldrin answered questions from the audience after his prepared remarks, a crowd was forming outside the ballroom as more than 100 people held copies of Aldrin’s book “Mission to Mars,” hoping to get them signed.

Among those waiting was Fouad Khoury, a first-year aerospace engineering and physics student who said he was inspired by Aldrin’s words of encouragement about the importance of hard work and a personal sense of adventure.

“I’ve heard about Buzz Aldrin since I was little,” Khoury said. “It was inspiring to see someone who had walked on the moon in front of you.”

The message of collaboration was consistent throughout Aldrin’s talk as the astronaut talked about political and international partnerships and shared visions as being pivotal to humans’ success in space.

“I worry we’re caught in what could be an unproductive race to the moon,” Aldrin said. “Let’s focus on cooperation with our international partners. Don’t race with them.

“The dream of reaching Mars … looks like it’s finally getting a little closer.”

Read the Original Article at Indystar.com