Buzz Aldrin on His Lunar Home, the Eagle

17 May Buzz Aldrin on His Lunar Home, the Eagle 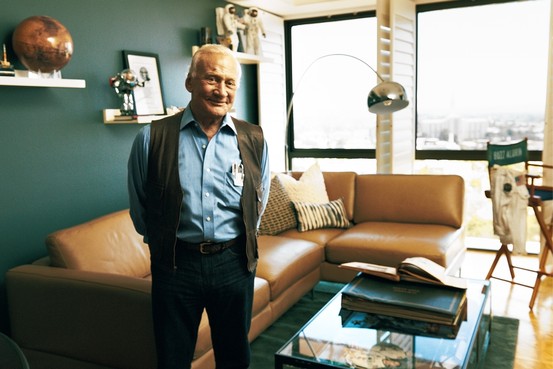 I can’t see the moon from my bedroom window. But I do like to go onto my patio to watch it rise majestically over Los Angeles. When I see the moon up there, I don’t say to myself, “Hey, I walked on your face,” or “Thanks for disrupting my life.” I just feel grateful it let us land safely in 1969 and let us take off. 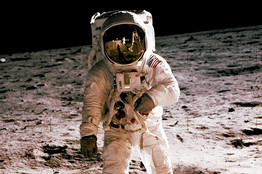 Believe it or not, my mother’s maiden name was Moon. Her family came from Britain, and she suffered terribly from depression. Like my grandfather and cousins on her side of the family, she took her own life. It happened in 1968—a year before the Apollo 11 launch. It was tough, but I blocked it out by focusing on all the years she supported me—as did my father, who was an aviation pioneer and had known Orville Wright.

After Apollo 11 lifted off in Florida [on July 16, 1969], the three of us—me, Neil Armstrong and Mike Collins—traveled in space for three days to reach the moon’s orbit. 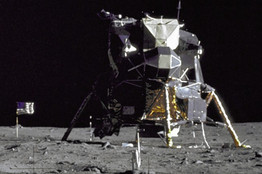 The next day, Neil and I climbed into the lunar module and detached from [command module] Columbia to begin our descent to the moon. We had to stand in the craft—the design didn’t allow for seats. Our feet were held down on the floor by elastic cords to keep us from floating around.

Landing on the moon—with all of the risks—sounds scary. But our training prepared us by concentrating on failures and solving big problems under extreme pressure.

Once we touched down at the Sea of Tranquillity [on July 20], the Eagle was our home for the next 21½ hours. When I was a kid, my first airplane ride was in a propeller aircraft painted to look like an eagle and piloted by my father. The lunar module was named Eagle—and an eagle insignia was on our arm patch—so I felt safe.

On the moon, we had one-sixth of Earth’s gravity, allowing Neil and me to move around easily in the Eagle to put on equipment for our walk. The module’s color scheme wasn’t much—the interior was gray and industrial, and there were lots of labels with white and black text. Some handles were yellow, and there was a yellow guard around our telescope.

We ate freeze-dried packaged food and had a mix that became an orange-grapefruit drink when water was added. There was no coffee. The Columbia orbiting above had hot water, but not the Eagle.

Four hours after we touched down, Neil went out of the craft first to set up a TV camera pointed at Earth and take photos. I followed 20 minutes later. When I stepped onto the moon’s surface, it felt cushiony, not gravelly—thanks to all the dust. There was no crunchy sound under my boot.

The strangest feeling was standing on the surface and looking back home at Earth—where every other human being was except the three of us. One of the most famous pictures from the mission was taken by Neil of my gold helmet visor—with Neil and the Eagle reflected in it. If you look carefully, you’ll see smudges on both legs of my spacesuit.

When Neil had come down the ladder, he had to jump a little to drop to the next rung. His boots left moon dust on the last rung. So when I jumped a little coming down to the pad, I underestimated the leap and my shins brushed the last rung, picking up the dust.

Returning to the Eagle about two hours later, we had a problem. I noticed the engine arm’s circuit breaker on my side had detached. It had to be engaged somehow if the ascent engine was to fire and lift us off the surface.

Houston wanted us to sleep while they learned as much as possible about the breaker problem. But the module was freezing cold, so Neil and I put on our helmets, and I turned the heat full-up. I curled up on the floor, and Neil tried to sleep sitting on top of the asset engine cover. But he told me later that Earth’s bright blue light was shining through the Eagle’s telescope and into his eyes, keeping him awake. Not very homey—but we managed.

When Houston woke us several hours later, they told me what to do to fix the circuit breaker. I engaged it with a felt-tip pen. Since the pen was made of plastic, there wasn’t a risk of encountering electrical voltage when I pushed in the remainder of the disengaged breaker.

Once Houston concluded the problem was fixed, relief replaced concern. I felt we might make it home instead of perishing there. A short time later, Houston gave us the go-ahead: “Apollo 11 at Tranquillity Base, you’re cleared for liftoff.” I responded, “Roger, Houston. We’re No. 1 on the runway.” Those were two absurdities, of course. There was no runway and no one else was behind us. A little space humor.

The Eagle was like home on the moon—only we didn’t have two wives telling us to clean up. We were the chief cooks and bottle-washers. So before we left, we put out the trash, just as we did back home. It’s all still sitting there on the lunar surface waiting for the trash collector.