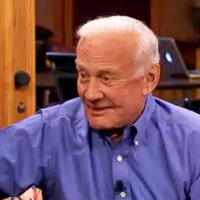 Pioneering astronaut Buzz Aldrin wants to see humans on Mars by 2035, but he doesn’t think the nonprofit organization Mars One will be the first to achieve it.

Aldrin joined HuffPost Live this week to discuss his new book “Mission to Mars,” in which he outlines his vision for the future of space exploration. Aldrin told HuffPost Live’s Alyona Minkovski that he commends Mars One for generating great interest in the idea of living on the planet permanently. Still, he said he’s not convinced they have the technology to build a human colony on Mars by their goal of 2023.

“Monumental achievements by humanity should be done by major organizations as much together as possible,” Aldrin said.

Aldrin said that he believes international cooperation will be essential in advancing our exploration of Mars and that he’s skeptical of any one group or corporation who sets out to do it alone. He said he’s also skeptical of billionaire Elon Musk’s goal of reaching Mars in 15 years.

Watch the Full Interview with Buzz Aldrin on HuffPost Live.