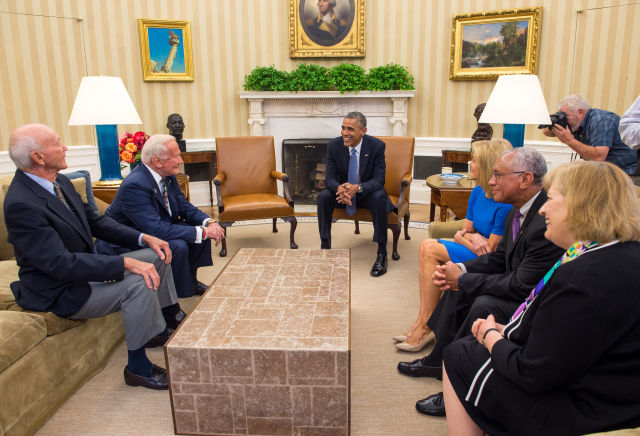 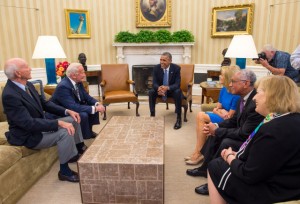 The second man on the Moon joins another Apollo legend in calling for change.

Of all the Apollo astronauts that walked on the Moon, none has made more of his fame than Buzz Aldrin, who followed Neil Armstrong onto the lunar surface in 1969. But long before he danced with the stars and inspired Buzz Lightyear, and even before he served as the Apollo 11 lunar module pilot, Aldrin was known as an expert in orbital rendezvous.

In recent years, Aldrin has used his astronautics expertise and fame to push a cycler concept that he believes would be the best way to visit and eventually inhabit Mars. In his public lectures, however, Aldrin has largely avoided criticizing the present approach being taken by NASA with the development of the Space Launch System (SLS) rocket and Orion spacecraft and its two-decade “Journey to Mars.”

That changed at this week’s Humans to Mars conference. In his remarks, Aldrin said NASA should change the approach it has had in place since the 1960s, that of designing and managing development of its own rockets. He took direct aim at the SLS vehicle, which he reminded listeners was based on 1970s technology and the space shuttle rather than more modern concepts. “It competes with the private sector,” Aldrin said. “I thought most of us were in the process of learning that the government shouldn’t do that.”

FORMER NASA OFFICIAL: NASA MUST SHED “SOCIALIST” APPROACH TO SPACE EXPLORATION
Lori Garver says that the agency is wary of SpaceX’s deep space ambitions.
Aldrin was referring to efforts by SpaceX to develop the Falcon Heavy rocket, which has a launch capacity of 54 metric tons to low-Earth orbit (the SLS will have an initial capacity of 70 metric tons). Independent estimates suggest the SLS will cost more than the Falcon Heavy for each launch by at least a factor of 10.
During his remarks Aldrin also suggested NASA’s Orion spacecraft didn’t serve much of a purpose, in his view, for a Mars exploration program. “It’s rather marginal for its use at Mars,” Aldrin said, adding that he viewed commercial spacecraft as better options for transporting astronauts into low-Earth orbit and onto the Moon as staging locations for Mars missions. “I’m not sure I see where Orion fits in there,” he said.

Aldrin, who came to NASA in 1963 as a member of the space agency’s third astronaut class, also reflected on what NASA’s purpose should be in the 21st century. Before NASA existed there was NACA, the National Advisory Committee on Aeronautics. This government agency had responsibility for testing aircraft developed by the US and for promoting the aviation industry through applied research.

“We were NACA before we were NASA,” Aldrin said. “I think we should slowly revert back to the NACA advisory model, and perhaps a NASA center that’s competing with the private sector would do much better in the very exciting area of space propulsion and spacecraft, including how we get from one place to another.”

Further, Aldrin advised, NASA would perhaps do better to focus on game-changing technologies such as how to land on Mars, how to refuel in space and on the surface of the Moon and Mars, how to harvest water ice on those worlds, and how to develop nuclear reactors for use in space.

NASA CHIEF: APOLLO ENGINEERS WHO CRITICIZE SLS DON’T GROK MODERN ROCKETRY
Bolden defends NASA’s plans against those who say new rocket is too costly to fly.
Aldrin ended his comments on NASA’s current programs by remarking, “Somebody needs to say some of these things and get them out in the open.”
In doing so, he has become the second high-profile Apollo-era figure to suggest NASA should perhaps exit the rocket-building business after more than five decades.

That charge had previously been led by Chris Kraft, NASA’s first flight director and a key mission planner during the Apollo lunar flights. For a number of years Kraft has expressed a concern that NASA can’t afford to fly the costly SLS rocket more than once every other year and that a lack of missions will have dangerous consequences for the rocket’s reliability. He has said NASA should cede rocket-building to private companies like United Launch Alliance and SpaceX, which have demonstrated an ability to launch safely and at a lower cost. Kraft, in turn, has been criticized by NASA’s leadership for his views.

In 2010 Congress directed NASA to build the SLS and has increased funding for the rocket far above the space agency’s requests. Senators have said they have pushed for this funding because they believe it is essential that NASA retain the capability to design and build rockets because private industry cannot be relied upon to do this entirely on its own. Now, however, it seems that a growing number of Apollo veterans have seen enough from the private industry to suggest it is time for NASA to move on to new technology-development programs.