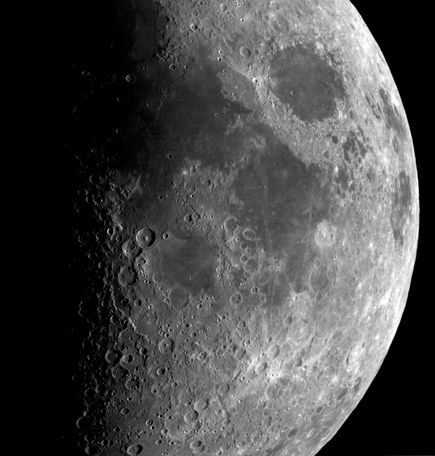 The Man Who Sold the Moon? A private space company’s chief, Robert Bigelow of Bigelow Aerospace Inc., called for the Federal Aviation Administration to allow property rights for lunar mining, at a Tuesday NASA briefing.

The North Las Vegas, Nevada-based firm already has a contract, announced in January, to provide the U.S. space agency with an experimental inflatable habitat for the International Space Station in 2015.

Now Bigelow, 69, wants private space companies (such as his own and Elon Musk’s SpaceX rocket firm) to take a larger role in expanding NASA’s astronaut explorations to beyond the space station’s orbit. (See “Moon Exploration.”)

And he wants the U.S. government to offer those firms a potential payoff—rights to mine the moon, echoing recent calls to mine asteroids. “The time has come to get serious about lunar property rights,” said Bigelow, speaking at a briefing with NASA manned spaceflight chief William Gerstenmaier.

“Ultimately, permanent lunar bases will have to be anchored to permanent commercial facilities,” he said. “Without property rights there will be no justification for investment and the risk to life.”

According to the FAA, however, the agency only regulates launches and reentries of rockets from orbit, and doesn’t oversee activities of spacecraft. The latest U.S. Commercial Space Act doesn’t mention lunar mining.

Bigelow Aerospace attorney Mike Gold, however, maintained that the agency’s oversight of launches made it the right place to start asking for permission to mine the moon.

Asteroid Mining on the Moon

“Asteroids have been hitting the moon for a long time, especially on the back side,” Bigelow said at the briefing, arguing that mining rare earths and other valuable resources would be even easier on the lunar surface.

He described future miners at these asteroid impact sites as “just walking around, picking stuff up from the ground.”

An inflatable moon base designed by his firm would land itself, in his view, after assembly in orbit around the moon.

Leaving aside the costs of moon rockets and the return of heavy minerals from the moon to Earth, a number of legal obstacles stands in the way of moon miners, says space law expert James Dunstan of Mobius Legal Group in Springfield, Virginia.

Space exploration advocates have called for lunar property rights since the days of the moon landings. However, the Outer Space Treaty prohibits nations from claiming territorial rights on the moon, which is widely seen as precluding them from awarding property rights to lunar resources.

Gold argued that the treaty, signed by the major space-faring nations, does allow for property rights claims, something to be examined in the opinion the firm plans to request from the FAA.

Dunstan is dubious, however, saying, “While Bigelow may be trying to force the U.S. government’s hand by seeking an opinion from the FAA, the FAA cannot (and my guess is would not) render an opinion as to the legality of mining the moon.”

Bigelow’s announcement came amid the release of the second half of a report, requested from the firm by NASA, on whether the space agency should seek commercial partners to explore beyond Earth’s orbit.

NASA already has a partnership with two commercial firms to supply the International Space Station, an effort widely seen as a success in the space community.

In remarks that implied criticism of NASA’s plans to test-fly its own large astronaut rockets in 2017 and 2021, Bigelow said the report called for NASA to instead use commercial rockets to explore the moon and asteroids.

NASA announced a plan last year to retrieve a small asteroid and park it in orbit around the moon as soon as 2021. Bigelow said private space firms and the space agency would both benefit by cooperating on such missions to a greater extent.

“We’ll look very carefully at all the recommendations in the report,” Gerstenmaier said at the briefing. He saw such partnerships, at this point in time, “starting small.”