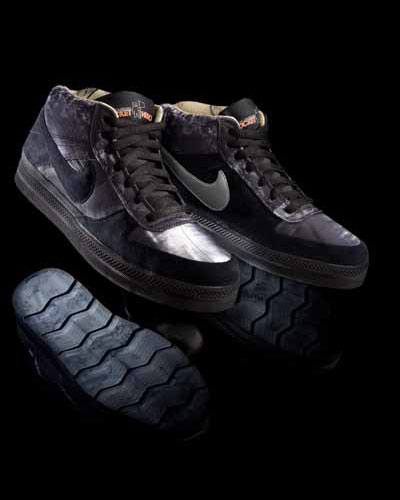 Buzz Aldrin—the original Rocket Hero—serves as an icon of space exploration, a pioneer and maverick who is always looking towards the next frontier.

It only makes sense that he’d choose to collaborate with the global giant and industry leader in athletic footwear—Nike.

Buzz Aldrin, the second man to walk on the Moon, shared his lunar experiences, including photographs from the Apollo 11 mission, and his vision for future space travel, including his hand-drawn rocket schematics, with the Nike team.

The results are out of this world!

This sleek midnight black shoe physically represents the infinite darkness and unseen depths of space, as experienced by Buzz Aldrin.

The two-toned Swoosh design mimics the dark and light side of the Moon. The upper and toe are printed with one of Buzz’s own photos taken in 1969 whilst orbiting the moon in Apollo 11.

His hand-drawn StarBooster rocket schematics and Mars orbits are built into the sockliner and the outer sole.

Buzz is the ultimate Rocket Hero and now anyone can walk in his footsteps, because his actual footprint, forever stamped into Moondust, is emblazoned across the insole.

Now you can walk in the shoes of a man who spacewalked his way into history!

….Just another small step for mankind.