As America pays tribute to Neil Armstrong in a memorial service Thursday at the National Cathedral in Washington, I would like to reflect on the life and legacy of this great space-exploration pioneer.

The memorial service, I note, falls one day after the 50th anniversary of President Kennedy’s “moon speech” at Rice University in Houston, a speech that fired the nation’s imagination and energies to undertake “the most hazardous and dangerous and greatest adventure on which man has ever embarked.”

I was deeply saddened to learn of Neil’s passing—my good friend and Apollo 11 crewmate along with Michael Collins. It never occurred to me that our mission commander might be the first of us to pass.

Thinking about Neil, I was reminded of the statement attributed to Sir Isaac Newton in the 17th century, when he attempted to explain how he was able to develop a powerful understanding of physics and mathematics: “If I have seen further, it is because I have stood on the shoulders of giants.” 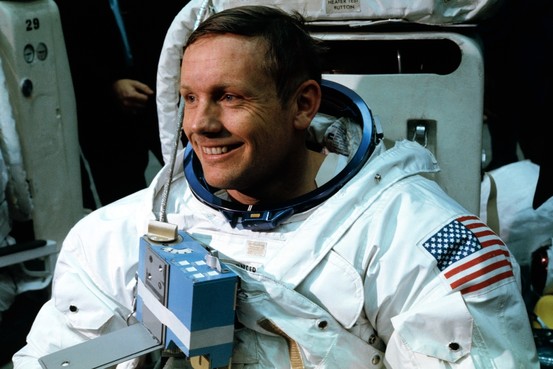 For the Apollo program, Neil was that giant. He was the consummate test pilot and astronaut whose skills were demonstrated repeatedly throughout his career, whether expanding the envelope of the X-15 space plane to the very edge of space (207,500 feet) at nearly 4,000 mph; gaining control of his spinning spacecraft during Gemini 8 in 1966 and guiding it safely back to Earth; ejecting at the last possible moment before the Lunar Lander Training Vehicle crashed, then quietly returning to his office to analyze the cause of the malfunction and file a mishap report; or, most especially, skillfully guiding the Apollo 11 Lunar Module Eagle to a safe landing in a boulder-strewn lunar expanse.

I still vividly recall standing with Neil on the barren, desolate, yet beautiful surface of the moon, looking at the small, brilliant-blue planet Earth, suspended in the blackness of space, while Mike orbited above us awaiting our return, as virtually the entire world took that journey with us.

Neil did not see Apollo 11 as an ending—rather, he regarded the moon landing as a first small step for humankind into the cosmos. If Neil was an extraordinary engineer, astronaut and leader, he was also soft-spoken and reserved, preferring to advocate quietly for space exploration from behind the scenes. He didn’t seek fame or praise for the work that he knew countless others had done to make the moon landing possible.

The last time Neil and I met at the White House, which we did periodically to boost the space policy with a succession of presidents, we talked about where the next step into the future should lie: to the moon or Mars? I said Mars. Neil said: “No!” He thought that we had much to learn from the moon before moving on to other challenges. But in the end, while we differed at times on where next to go and how best to get there, we always shared a common belief that America must lead in space.

As we contemplate his passing, let us also pause to remember those who gave their lives in pursuit of achieving the dream of space exploration: the crews of Apollo 1, Challenger and Columbia. We can honor them all, and the president who first set the moon-landing challenge before the nation, by renewing our dedication to space exploration—and resolving to pursue it with the same determination and enduring commitment to excellence personified by Neil Armstrong.

Dr. Aldrin, an astronaut on Apollo 11 and Gemini 12, is the CEO of Buzz Aldrin Enterprises.

A version of this article appeared September 13, 2012, on page A13 in the U.S. edition of The Wall Street Journal, with the headline: Remembering Neil Armstrong.