Like during the 1960s for the Apollo Program, an inspiring and an audacious goal—a Unified Space Vision is needed for space exploration to establish a permanent human presence on Mars. The proposed architecture establishes pathways of progressive missions to cis-lunar space, asteroids, Phobos, and eventually to the surface of Mars.

One unique innovation of the mission architecture is to use “cycler” spacecraft that would travel between Earth and Mars perpetually, every two synodic periods in S1L1 cycler orbits. The two cyclers, outbound and inbound separated by synodic periods are identical and at a first outbound Earth encounter, three landers intercept the cycler via hyperbolic rendezvous, carrying two crew members each. The outbound cycler carries three landers with six crew members total.

One unmanned lander lands on Mars demonstrating Mars landing procedures, and two landers land on Phobos with three crew members in each. The Phobos crew will remotely connect nine XM3s confirming interconnects using techniques developed for the assembling of both lunar bases. The outbound cycler returns in 4.135 years to receive three landers with a total of six crew members; each lander carrying two crew. If the Phobos crew of six successfully connects the nine XM3 modules; creating the Mars Operations Complex (MOC), they will then take a lander and go to the Mars surface. The inbound cycler carrying six crew members replaces the original six crew members on Phobos using two landers; three crew in each lander, and the remaining lander directly to Mars unmanned.

At this point that six crew members have occupied the surface of Mars with a total three landers on the ground, the first permanent settlement on Mars is established.

The proposed architecture is “evolvable” which could be readily updated and adapted to new technologies and concepts. The Unified Space Vision is a viable plan for humanity’s next bold step between our home planet and Mars, eventually to secure our future second home!

This video shows the work done by Purdue University students in collaboration with Dr. Buzz Aldrin as a part of their 2015 Spring Spacecraft Senior Design course.

Click here to read the Aldrin-Purdue Final Report
In this document you will find detailed analysis of every
vehicle and system the Senior Spacecraft students designed.

Step by step—just as Mercury and Gemini made Apollo possible—we move deeper into space to land on Phobos, the inner moon of Mars, all in prelude to a mission to the Red Planet itself!

Such bold missions of exploration will require determination, support and political will—as did our mission to the moon four decades ago. If we have the vision, we can reach these destinations on the pathway to Mars within the next two decades.

And if we persevere on this pathway, we can reach Mars itself before 2035—66 years after Neil Armstrong and I flew the quarter-million miles through the blackness of space to touch down onto Tranquility Base—which was 66 years after the Wright Brothers’ first flight.

But, to realize the dream of humans on Mars we need a unified vision. We need to focus on a pathway to the prize.” 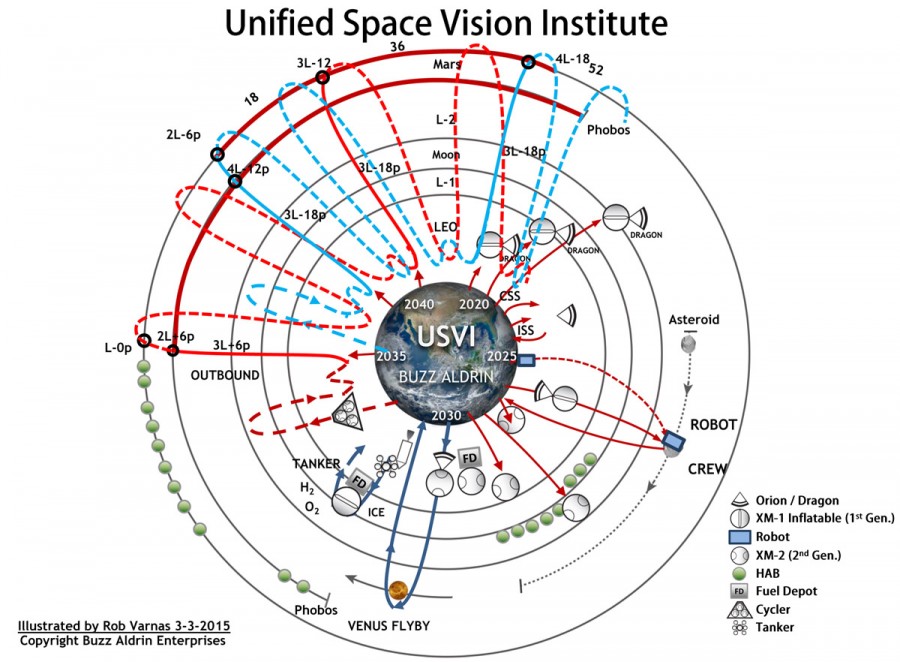 This plan renounces America’s goal of being first on the moon (again) in a new Space Race with the Chinese, but rather encourages America to initiate a lunar consortium where international partners—China, Europe, Russia, India, Japan—would do the lion’s share of the planning, technical development and funding for manned missions back to the moon.

In the meantime, America needs to develop new strategies, new launch vehicles and new spacecraft for the years beyond 2015 to bring us to the threshold of Mars, by way of progressive joined human and robotic missions to comets, asteroids and Mars’s moon Phobos.

“No giant leaps this time. More like a hop, skip and a jump. For these long-duration missions we need an entirely new spacecraft that I call the Exploration Module, or XM. Unlike the Orion capsule, which is designed for short flights around the Earth and to the moon, the XM would contain the radiation shields, artificial gravity, food-production and recycling facilities necessary for a spaceflight of up to three years,” explains Buzz.

The last step toward Mars, around 2025, would be a landing on the planet’s 17-mile-wide moon, Phobos, which orbits less than 4000 miles above Mars. A Phobos base would be the perfect perch from which to monitor and control the robots that will build the infrastructure on the Martian surface, in preparation for the first human visitors.