.The Cycler system alters the philosophy behind a Mars program. It makes possible the dream of regular flights to the Red Planet and a permanent human presence there. That’s the only way we’ll ever succeed in taking mankind’s next giant leap: a subway-in-the-sky between our planet and our future second home..

In the early 1980’s, Buzz started thinking about applying his orbital rendezvous expertise to a lunar spacecraft system that would perform perpetual cycling orbits between the Earth and the Moon by using the relative gravitational forces of these two bodies to sustain the orbit, thereby expending very little fuel. The only problem was that it took longer to get to the Moon this way, and for such a short distance of a four-day trip the cycling approach was not sufficiently advantageous.

Upon the recommendation of Tom Paine (former NASA Administrator during the Apollo Moon landings), Buzz began to adapt the cycling orbit concept to the much more complex goal of human missions to Mars. Buzz’s shrewd estimations of the relative movements and positions of the Earth and Mars to determine the gravity-assist trajectories and orbital route of a perpetually cycling reusable spacecraft, as seen in his numerous hand drawings, were verified by engineers at the Jet Propulsion Laboratory (JPL). His concept worked and was christened the “Aldrin Cycler.” 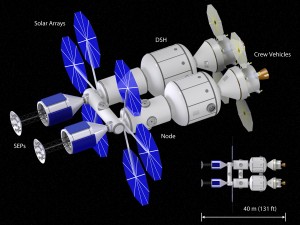 Aldrin’s system of cycling spacecraft makes travel to Mars possible using far less propellant than conventional means, with an expected five and a half month journey from the Earth to Mars, and a return trip to Earth of about the same duration on a twin semi-cycler. The Aldrin Cycler’s design features a slow rotation of the spacecraft to create artificial gravity to avoid the bone and muscle loss hazard of weightlessness on long-duration trips. In each cycle when the Aldrin Cycler’s trajectory swings it by the Earth, a smaller Earth-departing interceptor spacecraft ferries crew and cargo up to dock with the Cycler spacecraft. Ultimately, the Aldrin Cycler system of transportation offers a way to make travel to Mars sustainable for the long-term, in contrast to the brief excursions to the Moon during the six Apollo lunar landings from 1969 to 1972.

More recently, Buzz has been working with engineers from Purdue University to bring to realization the schematics for the “Aldrin Mars Cycler,” as it is now referred to. In fact, James Longuski, PhD, Professor of Aeronautics and Astronautics at Purdue, with whom Buzz is working, was one of a half dozen engineers at JPL who attended Buzz’s first formal presentation on his Cycler trajectories in 1985.

Buzz envisions the first astronaut explorers the year 2030, with missions lasting 5 years or longer. Initial exploration would be followed by colonizers, permanent settlements, and eventually efforts to terraform the red planet and create a habitable Earth-like atmosphere. A five-year plus mission to Mars may seem long, but Buzz has bound at least one taker. In a 2007 interview with film director James Cameron for Wired Magazine, Buzz related to Jim the need for such an expectation on Mars missions to establish a growing permanence. Jim responded: “There won’t be any problem getting people to sign up to go to Mars for five years. Hell, I’d go.”

Other Articles and Papers