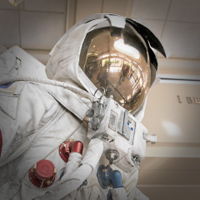 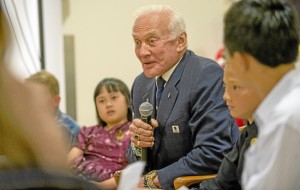 YORBA LINDA -Apollo astronaut Buzz Aldrin was sitting down Tuesday and answering questions about going to Mars, the private vs. public missions issue and about how he became an astronaut.

But these questions weren’t coming from the adult audience at the Richard M. Nixon Library and Birthplace, where at 7 p.m. he talked about his newest book, “Mission to Mars: My Vision for Space Exploration.”

They came from about 30 mostly middle-school students from the Beckman Foundation’s Beckman @ Science program during an earlier discussion at the library.

But Aldrin, who was the second man to walk on the moon in 1969, impressed the youngsters.

“He was a lot more impressive than I thought he would be,” said Garrett Ward, 12, of Placentia. “He knew a lot and could explain it.”

“It was really cool that he took the time to talk to us,” Beckman said.

Aldrin, who was on Apollo 11 along with Neil Armstrong on the first mission to the moon, did come with a message: The United States needs to go to Mars and shouldn’t be second to any country in space development.

“We have a lot of catching up to do to get back to where we were on top of space transportation,” he said. “I don’t think you want to grow up and see the U.S. in second, third or fourth (place) in the world.”

Aldrin said the first step towards going to Mars isn’t going back to the moon.

“We don’t need to go back to the moon and compete with the Chinese,” Aldrin said. “That’s a no-win situation.”

He also talked about what would be necessary. The United States will have to build up the power of its spacecraft to get to Mars. One step would be going to asteroids, he said. Another would be to fly past Mars and not land.

Just like with the Apollo mission, there will be a lot of testing, he said.

The one thing that makes it more difficult than in the 1960s is money, Aldrin said.

“I believe a national effort with about 4 percent of our (national) budget at the peak years went to support the Apollo program,” Aldrin said. “We’re only getting one-half percent now. And Mars is more difficult.”

Aldrin also talked about the possibility of a private company going to Mars. It’s not likely, he said.

“Private organizations usually invest money in something that will provide a profit or return on their investment,” he said.

That’s usually taking cargo or human beings to the International Space Station and that’s mostly NASA making the payments, he said. Who would pay to go to Mars?

He also was asked about extraterrestrials.

Aldrin said there’s no evidence of any life other than what is on the Earth, but it’s possible. It is even likely that there is life on a planet in another galaxy or solar system.