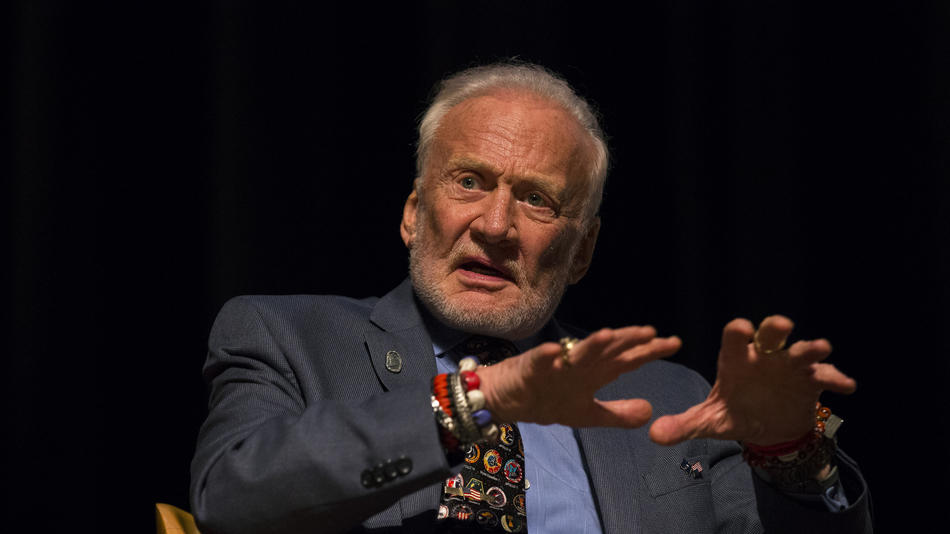 BOSTON – Astronaut Buzz Aldrin, who was one of the first men to step foot on the Moon in 1969, now eyes Mars as earth’s next frontier.

Aldrin shared his experiences in the U.S. space program as well as his dreams for a permanent human settlement on Mars in the opening general session here at Optometry’s Meeting.

The New Jersey native graduated third in his class from West Point, flew 66 combat missions with the Air Force in Korea, was decorated with the distinguished Flying Cross, served a tour in Germany and earned a doctorate of science degree in astronautics at MIT, AOA President Steven A. Loomis, OD, said in his introduction. Aldrin was selected by NASA in 1963 into the third group of astronauts.

Since then, Aldrin, now 86, was decorated with the Presidential Medal of Freedom and Congressional Gold Medal. He is the author of nine books. In 2014 he revamped his Share Space Foundation to focus on science, technology, engineering, arts and math to ignite interest in space, Loomis said. In 2015 Aldrin launched the Buzz Aldrin Space Institute at Florida Tech to further his vision of a permanent human settlement on Mars.

“When people work together, you can sometimes accomplish the impossible,” Aldrin began.

In 1961 NASA launched America’s first Mercury astronaut, Alan Shepherd, into 15 minutes of orbital flight, just touching the edge of space, Aldrin said. He credited President John F. Kennedy with challenging NASA for a man to walk on the moon before the end of the decade.

“We had not even put a man in orbit yet,” Aldrin said. “Many thought it was impossible. But we had a leader with the vision, determination, courage and confidence that we could get there. By publicly stating a goal, putting a specific time on that achievement, Pres. Kennedy gave us no way out. And if space was going to be the new frontier, I wanted to be a part of it.”

Aldrin said when he stepped on the moon in 1969, “the first words that came to my mind were ‘magnificent desolation.’ It was a magnificent accomplishment for humans,” he said. “And yet there was that total desolation of the lunar landscape looking out at the horizon, very clear, curving away. No sign of life. No atmosphere, just blackness of space.”

He shared the story of the moment when it was time to restart the engines to head back to earth, and the crew discovered a broken circuit breaker.

“NASA couldn’t come up with a way to repair it,” Aldrin said. He said he used a felt tip pen to push it back in, and it worked.

“Back on earth, everyone felt like they had participated in this incredible journey,” he said. “They were cheering for what we represented. By a nation and a world coming together, we had accomplished the impossible. I feel so privileged to have played a part in that historical event.”

Aldrin said it was difficult returning from the mission to a celebrity status, not knowing what to do next after reaching that pinnacle. He said his marriage was coming apart, his family struggled, he suffered from depression and he began drinking. He said he asked for help and has now been sober for 37 years.

“My life is better than it’s ever been,” Aldrin said, “and I feel like so many things are just coming together for a wonderful future in space. I consider myself to be a global statesman for space. I’ve been doing the best to move things forward.”

He said venturing into space improves life for everyone here on earth. The scientific advancements and innovations that have come from space have created products and technology we use in our daily lives, such as cell phones, TV, GPS and medical advances.

Aldrin said he agrees with Prof. Stephen Hawking in that the remarkable progress made in the last 100 years can only continue if we seek a future in space.

“I won’t be around to see much of it happening, but I want to do everything I can to lay the groundwork,” Aldrin said. “I wrote Mission to Mars: My Vision for Space Exploration and the children’s book: Welcome to Mars. These kids are the ones that will be carrying out the Mars missions. I’ve been planning a space transportation system called Cycling Pathways to Mars. It’s a permanent orbit that swings by the earth and swings by Mars, comes back and does that again. I started in 1985. Now with the help of Purdue University and two different study programs, I formed the Aldrin Space Institute at Florida Tech. I have a team that’s helping me fulfill and develop these concepts I’ve been working on, all with the goal of a permanent settlement on Mars. You ain’t seen nothing yet.” – by Nancy Hemphill, ELS, FAAO