Buzz Aldrin Believes US Can Establish Permanent Mars Residence by 2035 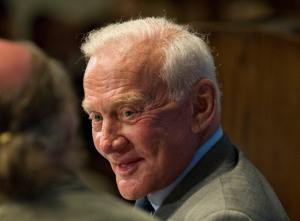 WASHINGTON (CBSDC) – Buzz Aldrin, famous for being the second human being to step on the surface of the Moon, has an astronomical plan to send people to live on Mars.

This isn’t typically something one would discuss on a Sports Talk radio station, but when Holden and Danny booked Buzz freaking Aldrin on the show, what were they going to do? Turn him away?

“Well there’s a group of people in the Netherlands who put together a company. It’s called “Mars One: One Way Trip,” Aldrin said on 106.7 The Fan.

“They’ve had almost 80,000 applicants,” he continued. “I believe they’re planning a departure around 2023 to send a number of people to Mars.”

While Aldrin wasn’t certain of the more technical aspects of the trip, which one would assume by that he means how they’re physically going to hop from planet to planet, he said the real challenge is convincing people that the trip is intended to establish permanent residence, which he believes can be done by 2035.

“It will be an international settlement and it will be pioneered by the United States,” Aldrin said, blowing everyone’s mind.

The trip would itself would be five to six months long, which isn’t exactly comparable to a long road trip, but as Aldrin said, “if you’re spending the rest of your life at Mars, you don’t really care that much about how long it takes to get there.”

“Now it’s up to me to try and convince a leader of this country that that’s the type of heritage that is attainable,” Aldrin said, which he believes can be done by the year 2020, or the re-election year for the president that succeeds President Obama.

All our lives are meaningless next to this guy.