Buzz Aldrin: One small step for man — closer to Mars 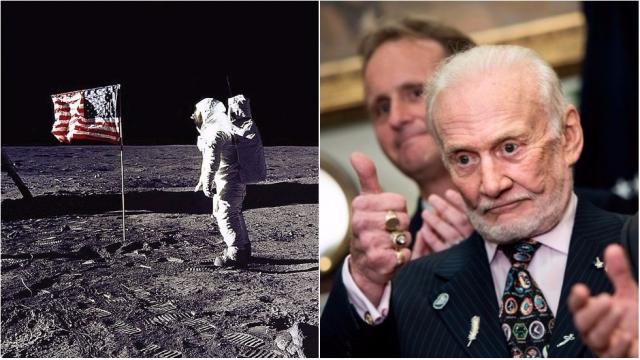 Forty-eight years ago, on July 20, 1969, I know exactly where I was: standing on the Moon with my fellow space traveler, Neil Armstrong. Our Apollo 11 colleague, Mike Collins, was circling high above the barren lunar landscape I described as “magnificent desolation.”

America’s Apollo program was a team effort, tapping into the talents of 400,000 people that bonded together to make real a vision. It was a unified undertaking, a blend of government, industry and academic wherewithal to turn a long-held dream into a reality.

But that was then — today it’s time to rejuvenate the country’s space program.

I was very pleased to see the White House in late June revive the National Space Council, to be chaired by the vice president. It was high time to resurrect this council and once again guide American space policy to regain and retain U.S. leadership in space. Our nation has suffered by not having such a council to ensure that a vibrant, resolute and true trajectory for NASA’s civil program is put in place.

A number of action items should be taken by the National Space Council. Firstly, in my view, steps must be taken to recognize China’s impressive space exploration agenda. This view was fortified a few months ago when I took part in a major Global Space Exploration conference held in Beijing. Space agency leaders from Italy, Germany, Japan, Russia, Canada, France, South Africa, the European Space Agency, as well as China took part. Embarrassingly, missing in the interchange was the United States.

I think the National Space Council could exert a strong position of leadership by pulling together space-capable nations to forge a partnership — one that utilizes low Earth orbit and the Moon as a testing ground for technologies needed to make possible footprints on faraway Mars. The United States is the experienced and potential leader of this coalition of space-capable countries. Doing so could decrease the cost of many activities in Earth orbit and at the Moon in preparation for Mars.

Now, back here on Earth. I have two words for Washington: fiscal discipline. The second word is not embraced in the nation’s capital, so let’s call it fiscal responsibility.

The programs that we have right now are eating up every piece of the NASA budget. It’s got to be reduced if we’re ever going to get anywhere new. People, companies, NASA itself, don’t like to have things reduced. But if we don’t, we’re going to continue spending to keep the International Space Station going. We’re going to keep the Orion piloted spacecraft, a project that is too expensive and too late. And we’re going to keep the Space Launch System flying once a year at a hefty price tag of billions of dollars. Again, we’re not going anywhere if we don’t do something about these issues.

I pride myself on thinking out of the box, of being innovative and a lover of long-range aims. Having farsighted goals and objectives is a trait of bold space exploration planning.To that end, for over 30 years now, I have championed the call for establishing a permanent human settlement on Mars. Striving to do so, I strongly believe, summons the very best of humankind to transform this lofty ambition into reality.

In my blueprint for the Red Planet, the plan projects we’ll have people on Mars by 2039. It is a plan to create a sustainable path to permanent inhabitation of Mars. This time no flags, footprints and scurrying back to Earth like we did in the Apollo program. I call the plan “Cycling Pathways to Occupy Mars.” It is a bridge-building plan that links the Earth, the Moon and Mars and paves humankind’s road to another planet.

To occupy Mars is a task like no other. This enterprise can unite the great nations of the world in a cooperative way. Setting sail to Mars, putting in place a thriving civilization on that far-off world, is a peaceful pursuit that’s unparalleled in history. It is time to place spacefaring nations on that trajectory.

Given the reactivation of the National Space Council, I call upon them to help secure a bold presidential commitment. That is, on the 50th anniversary of the first Apollo landing on the Moon in 2019, to commit to a continued occupation of Mars with international crews. Through U.S. leadership, we can facilitate and sustain the arrival of humans on Mars.

I have always appreciated British essayist T.S. Eliot who pointed out: “Only those who will risk going too far can possibly find out how far they can go.”

Indeed, the task ahead is daunting. But what’s a future for if not to dream big? I passionately believe it is our rendezvous with destiny.

Apollo 11 moonwalker, Buzz Aldrin, is an international advocate of space science and planetary exploration. Aldrin has authored and co-authored several books including “Mission to Mars – My Vision for Space Exploration,” children’s book “Welcome to Mars: Making a Home on the Red Planet,” and “No Dream Is Too High: Life Lessons From a Man Who Walked on the Moon.” Follow him on Twitter at @TheRealBuzz.

Read the Original Article at The Hill