Posted at 12:11h in Uncategorized by Team Buzz 0 Comments
0 Likes 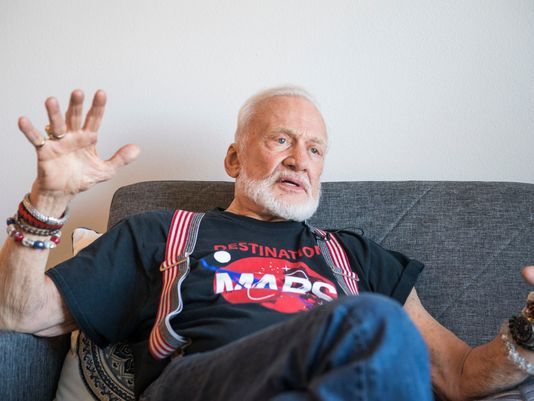 AUSTIN — Buzz Aldrin was the second man to walk on the moon. His next mission? Mars.

“The moon landing was a monumental achievement for humanity, but there’s no greater mission than mankind’s journey to Mars,” says Aldrin, 87, the astronaut on the Gemini 12 and Apollo 11 missions who has a plan for creating a permanent human settlement on Mars.

And he’s willing to try just about anything — tee-shirts (Get Your A** To Mars), meeting at the White House, even a spin on the catwalk — to get his message across. The latest: a virtual reality installation that aims to get users close to the Red Planet experience, without actually donning a helmet.

In an exclusive interview with USA TODAY before he was to present a panel at the SXSW tech-music-film confab on Tuesday, Aldrin previewed a 10-minute VR film in which his 3-D hologram takes viewers on a tour of the Moon and Mars. The visually stunning 10-minute film was created by holographic technology company 8i.

The film is an important tool in the selling of a  three decade dream from Aldrin – who followed Neil Armstrong onto the Moon’s surface in July 1969. Aldrin envisions a sustainable settlement on Mars in which 18 people are shuttled to the planet every two years, culminating in a colony of 150. 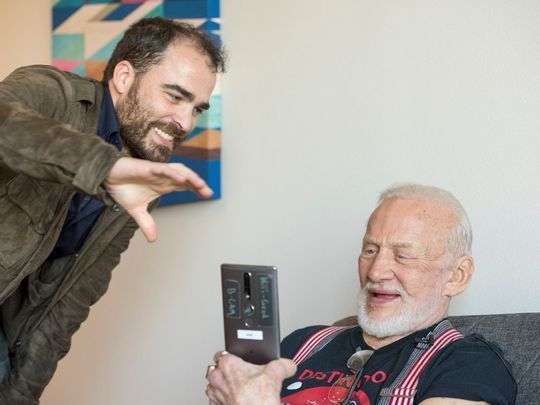 “This is not a flag poles and footprints program,” he said, in reference to past Moon missions where he and 11 others collected samples and conducted tests before returning shortly to Earth.

Ambitious as the plan may be, it is one that others are pursuing. Elon Musk’s SpaceX last year announced its Interplanetary Transport System to carry 100 people per flight to Mars and establish a self-sustaining colony in the next 50 to 100 years. Blue Origin, the space venture created by Amazon founder Jeff Bezos, is also shooting for Mars, the moon and other deep-space destinations.

“They are moving rather rapidly,” Aldrin said in a nod to tech billionaires Musk and Bezos.

But Aldrin has a unique advantage: He is one of a dozen people to set foot on the moon and his MIT doctoral thesis, Line-of-Sight Guidance Techniques for Manned Orbital Rendezvous, is considered a seminal piece in space exploration.

Aldrin first broached the idea of a manned mission to Mars in 1985, when he proposed the existence of a spacecraft trajectory now known as the “Aldrin cycler,” which makes travel to Mars possible using far less propellant than conventional means. In August 2015, he presented a master plan.

From his early years in New Jersey, Aldrin says he was fascinated by the outer space adventures of Buck Rogers and Flash Gordon; his Mars plan is the latest reach for the stars. The project will take lots of money, an international partnership of countries, technology such as robotics and machine learning, and the support of the federal government, he says.

If all goes according to plan, Aldrin’s Mars mission will take launch July 20, 2019 – the 50th anniversary of the Moon landing – and send its first crew in 2021.

“I don’t want to be remembered for just kicking Moon dust,” says Aldrin, who served as a jet fighter pilot in the Korean War and written several books.

“Buzz Aldrin’s Cycling Pathways to Mars” will be distributed by Time Inc. to TIME and LIFE VR audiences across multiple virtual reality platforms on HTC Vive and to Oculus Rift, according to 8i.