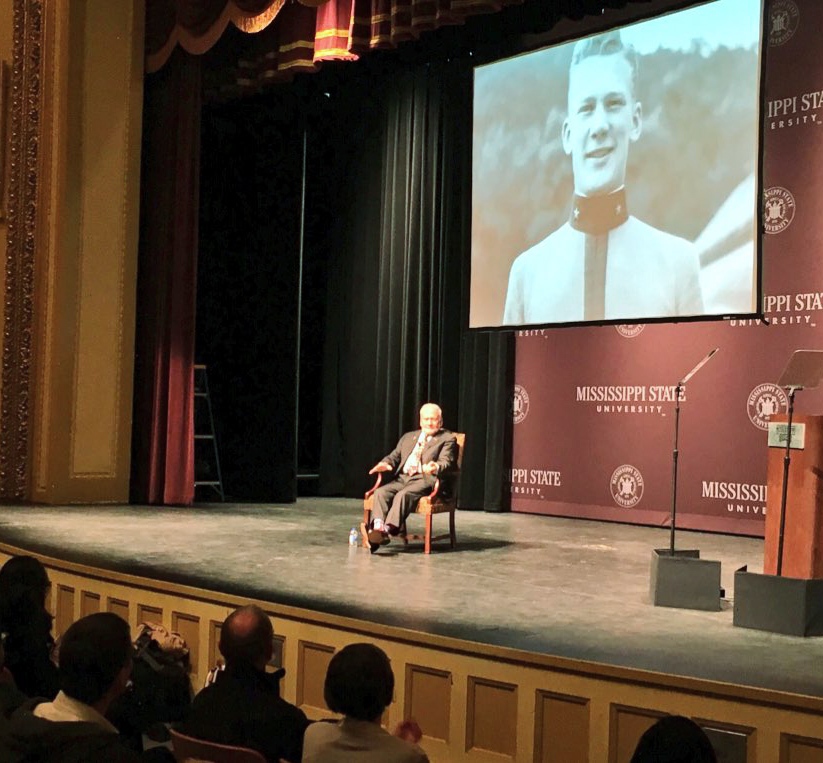 Buzz Aldrin gave a riveting keynote speech at Mississippi State University Global Lecture Series on Feb. 9. All 1,000 seats in Lee Hall’s Bettersworth Auditorium were filled with people eager to hear the national hero with about 250 more people watching the simulcast in the Union Ballroom.
Aldrin inspired the captive audience charging them to unite together to face the unimaginable. He discussed what he and his crew members did on the Apollo 11 mission, they started with a dream, and accomplished the impossible.

“When we work together, the world can achieve the impossible dream,” Aldrin said. “I believe we can accomplish the impossible again.”
JoJo Dodd, president of the Student Association, said Aldrin’s words were both powerful and encouraging.
“Dr. Aldrin’s insight that only through global cooperation and innovation will the world’s most pressing problems be addressed and the ‘impossible’ be accomplished was quite powerful. It would have been difficult to leave without being inspired by such an icon figure’s optimistic view of the future of our world,” Dodd said.
Aldrin came to the stage showing the audience his patriotic American flag socks setting the foundation of his whole lecture. He began with a video giving insight into the Apollo 11 mission. He then proceeded to speak about the history of flight beginning with the Wright brothers and their first flight in 1903. Aldrin’s mother was born in this year, Marion Moon, and 66 years later, Aldrin landed on the moon.
The Apollo 11 mission happened because President Kennedy challenged Americans to be the first people to put a man on the moon during the space race with Russia. Aldrin said that Kennedy was the driving force behind the whole mission.
“He was a leader with a vision, determination, and confidence that we could get there,” Aldrin said. “President Kennedy gave us the way up.”
Aldrin earned his Doctorate of Science in Astronautics and wrote his thesis on “Manned Orbital Rendezvous,” a technique for a rendezvous of two spacecrafts in orbit. He dedicated his work in hopes that it would be used to aid in the space exploration. He was later able to test his theory during the Gemini 12 mission in which he was able to complete the risky docking successfully. The orbital rendezvous techniques he developed are still used by NASA today.
The first time Aldrin applied to be an astronaut, he said he was turned down because he had not been a test pilot. He applied again and was accepted. Aldrin was the first astronaut to train underwater.
Aldrin said his words when reaching the moon were, “Magnificent Desolation,” which showed how he was completely awestruck. He went on to explain his reasoning of these two words.
“Magnificent accomplishment for mankind, but completely desolate,” Aldrin said.
Aldrin said the hardest part of his mission was returning to earth. It was hard for him to find purpose after he reached the pinnacle of his life. He struggled with depression and alcoholism after his return. He then reached out for help and turned his life around by focusing on his passion for space. He encouraged the audience to never give up.
“It is never too late,” Aldrin said. “Do not ever be too afraid to ask for help.”
Aldrin said the future is in space and he is looking toward the future that we have there. He is currently helping to lay the groundwork for the future there. This is why he wrote his book “Mission to Mars” and his many other books to inspire the kids of today as he believes they will be the ones to land on Mars. He is a driving force to land humans on Mars.
“Humanity needs to explore beyond the current limits like we did in 1961,” Aldrin said. “Get your ass to Mars.”
Aldrin closed the night addressing college students with big dreams. He encouraged them to look ahead to the future with excitement and passion.
“Move through life, put your arms way out. You can experience a lot of things and then look at them as you go along, sample, think about them, and test the ones that may intrigue you and appeal to you, look at them a little bit and then choose the thing that turns you on, that causes you to do more research, to get more education. Pick what it is you want to do, and go for it. Be curious, if you’re curious enough you’ll start finding answers. Think ahead, be consistent and I wish you well. You’ll have a great life if you make it a great life,” Aldrin said.
Students were thrilled and inspired by Aldrin’s speech.
Collin Smith, freshman building construction science major said he found the chance to see Aldrin exciting.
“I have loved space ever since I was a little kid and to get to hear Buzz talk about his adventures was equally inspiring,” Smith said.
Nathan Holman, freshman mechanical engineer major appreciated the opportunity to see the man in the flesh.
“It’s one thing to see videos and read stories, but to hear from the American hero who actually went where no man has gone before was out of this world,” Holman said.

Read the Original Article at The Reflector Online