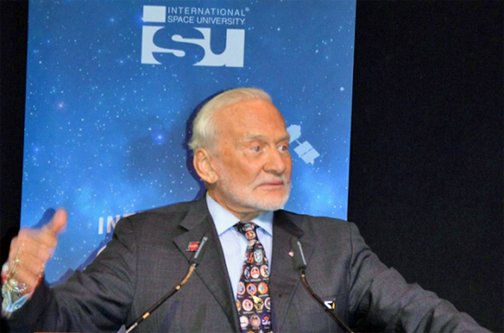 ISU has been very selective in choosing Chancellors who are considered by its students as extremely important figures in the space world. The first Chancellor, A. C. Clarke, is certainly most reputed as a science fiction writer (as one of ‘The Big Three’, together with Isaac Asimov and Robert Heinlein), but was also a scientist and extremely passionate about space travel.

The new Chancellor of the International Space University, Dr. ‘Buz’ Aldrin.
Photo is courtesy of ISU.

He was then followed by another important space personality, Professor J.J. Dordain, who was not only an outstanding figure with educational assignments at universities all over Europe, but was also strongly involved in European space strategy and became the Director General of the European Space Agency (ESA). After prolongation of his term as chancellor, and in order to have a geographical rotation, the Board of Trustees approved a successor to Professor Dordain in the person of another famous space pioneer, Dr. ‘Buzz’ Aldrin.

After engineering studies, Buzz Aldrin joined the U.S. Air Force as a pilot. Later, he earned a doctorate at MIT. After being selected by NASA as astronaut, he was involved in Gemini missions and in particular in EVA experiments. Buzz Aldrin became most famous during the Apollo 11 flight as one of the first of the moon walkers.

Symbolically, the transfer of chancellorship occurs at a special ISU event during the International Astronautical Federation yearly Congress, this year in Jerusalem, Israel.

The new Chancellor, Dr. ‘Buzz’ Aldrin, said, “ISU being at the top of today’s space education, I am delighted to be part of the leadership. I am honored to be the new Chancellor of ISU and following in Arthur C Clarke’s footsteps.”

The previous ISU Chancellor, Professor Dordain, said, “It was an honor for me to have two turns as the ISU Chancellor and to have the privilege of working with the next generation of space experts. It is even more of an honor to be the chancellor between two persons I personally admire, who both inspired my career.”