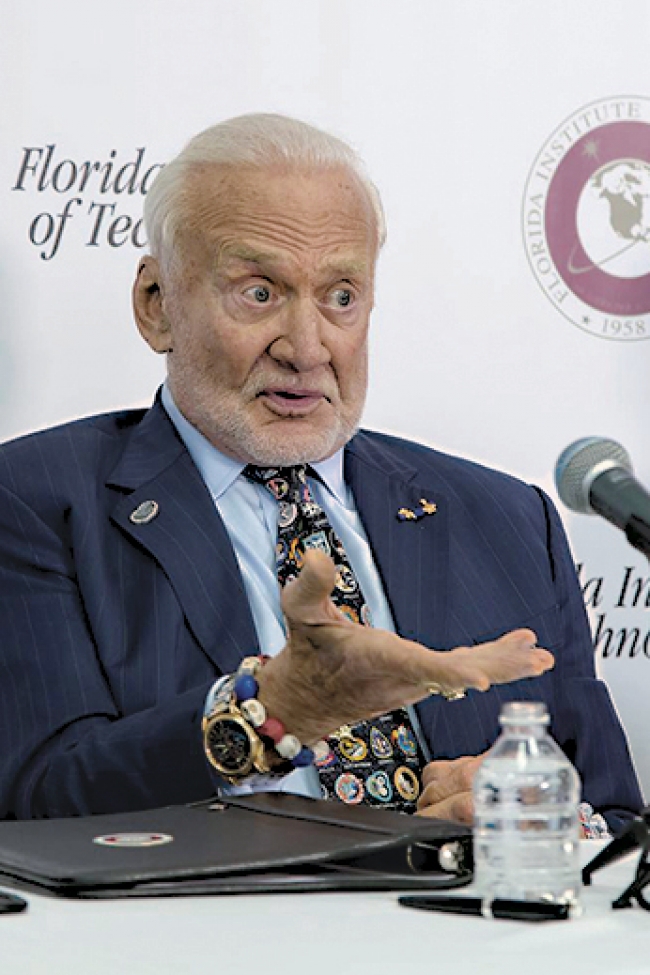 02 May Former Moonwalker Pushes Colonization of Mars From Florida Tech

Although renowned for long-ago exploits, Buzz Aldrin, at 86, seems as focused on shaping the future as on celebrating his past.
The second man to walk on the moon, in 1969, Mr. Aldrin was the first astronaut with a doctorate in astronautics, or anything else, when he was selected by NASA, in 1963. For decades, he has pressed federal aerospace officials and corporations to plan a permanent settlement on Mars.

To advance that mission, last summer he and the Florida Institute of Technology said they would set up the Buzz Aldrin Space Institute there. Mr. Aldrin became a research professor of aeronautics at Florida Tech and senior faculty adviser to the institute. At the same time, the university said its John H. Evans Library would establish the Buzz Aldrin Special Collection and Archives.

Mr. Aldrin says he chose Florida Tech, a private research university, because of its history of collaboration with the nearby Kennedy Space Center and because he moved from California to Florida last year. His son, Andrew Aldrin, an aerospace-industry veteran, is the institute’s director and an associate professor of business and liberal arts.

Many observers might view Buzz Aldrin’s purpose as quixotic, but the National Aeronautics and Space Administration has been edging along its plans for landings, possibly on Mars, by astronauts. By phone from the institute, Mr. Aldrin faults the agency for “stingy” Mars budgets, and he says he hopes to steer federal officials toward “a much longer-term progression of recovery of our space program, in the human-­space-flight area, certainly.”

Since 1985, in collaboration with scientists at leading space-mission research centers, he has developed his system of “Cycling Pathways to Occupy Mars.” NASA and other agencies’ plans “frankly, to me, are stale,” he says. His system depends on establishing permanent bases on the moon and on a moon of Mars, and then taking advantage of moon and planetary orbits to shuttle missions and supplies between Earth and Mars.

The Aldrin institute’s core function is to foster collaboration among universities and businesses around the world that will push forward the analysis, cost calculation, and planning of a Mars settlement. In January the institute brought together scientists for a two-day workshop on the aeronautic, physiological, psychological, and robotic challenges of meeting the goal.

Mr. Aldrin says the United States should be wary of ceding leadership in space exploration to other nations; rather, it should take the lead among “nations who could land on the moon.” Very important, he says, will be “commercial, private-sector investment, looking for a return.”

Mr. Aldrin worries that the American public is apathetic, distracted by Hollywood-style space travel — “the bizarre, the impossible, the impractical, Star Wars and Star Trek.” His vision for Mars colonization, he says, is “not just to make a series of visits and then leave it alone. That’s not going to inspire people.” — Peter Monaghan

Read the Original Article at The Chornicle of Higher Education