Launching a Fragrance Line (In a Manner of Speaking)

14 Jan Launching a Fragrance Line (In a Manner of Speaking) 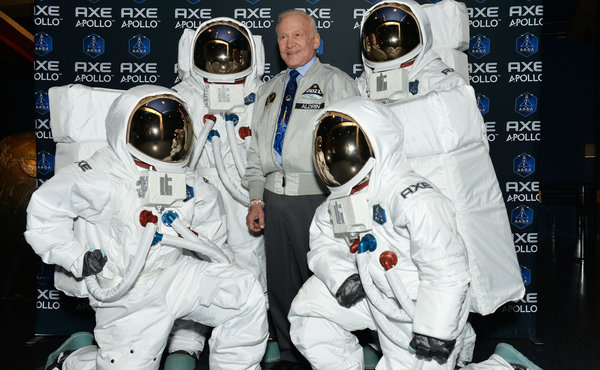 BRANDS often give away trips like a weekend in New York, but now Axe, the men’s grooming brand, has a giveaway that it can say, without hyperbole, is out of this world.

To promote a new line of products called Apollo, the Unilever brand will send 22 consumers into space. The former astronaut Buzz Aldrin, hired as a spokesman, announced the contest at a private media event at the Hayden Planetarium in Manhattan on Wednesday evening.

The brand refers to the effort as the Axe Apollo Space Academy, or AASA, meant to rhyme with NASA.

Axe is contracting with the Space Expedition Corporation, which plans to begin conducting commercial flights on Lynx, a suborbital space plane, in 2014. The Lynx, which is being developed by XCOR Aerospace, will take off and land horizontally, like an airplane, and use rocket power to blast into space. It seats only the pilot and one passenger.

The Space Expedition Corporation, which reports having already sold more than 200 tickets for future spaceflights, usually charges $100,000 for each flight that Axe is giving away. Flights are planned to last about an hour, reach an altitude of 64 miles, and provide a weightlessness experience of about five to six minutes before the Lynx descends.

The flights will be from Curaçao, an island off the Venezuelan coast. In a promotion for the sitcom “The Big Bang Theory” last July, CBS awarded a single ticket for a spaceflight on a Lynx space plane.

The concept for the Axe promotion, and a campaign including television commercials, is by the London office of Bartle Bogle Hegarty. In a commercial, a buff firefighter rescues a beautiful woman from a burning building. After they reach safety, they stand near the burning building, and the woman stares longingly into his eyes. Then, in the distance, she sees an astronaut in a spacesuit walking toward her, and she ditches the firefighter to run toward the astronaut. The text on the screen: “Nothing beats an astronaut. Ever.”

A voice-over directs viewers to AxeApollo.com to enter the contest. “Axe Apollo Space Academy,” continues the voice-over. “Leave a man. Come back a hero.”

The commercial was introduced online on Wednesday, and will begin appearing widely on television on Feb. 4, in rotation with another Apollo commercial that will be introduced during the Super Bowl on Feb. 3. This will be Axe’s first time advertising during the Super Bowl, where 30-second spots this year are estimated to cost an average of $3.7 million to $3.8 million.

With the Axe spaceflight promotion, rather than marketers coming up with a prize suitable for a specific product, it was the other way around.

David Kolbusz, a creative director at Bartle Bogle Hegarty, said that about a year ago his agency was considering ideas to promote the entire Axe brand, not just one fragrance.

“There was just a notion that Axe as a brand has always been about giving men confidence, and we also settled on this idea of women loving a hero and the universality of an astronaut as a hero,” Mr. Kolbusz said.

Noting that space tourism is beginning to capture attention, with companies including Virgin Galactic (started by Richard Branson, the billionaire founder of the Virgin Group), the agency began exploring the possibility of giving away rides on flights to Axe users.

Axe also was developing an unnamed fragrance. To align it with a nascent space promotion, the company decided to name the fragrance Apollo, after the American program dedicated to landing astronauts on the moon in the 1960s and ’70s.

“It was just a lovely symbiosis between the two things,” said Mr. Kolbusz.

Matthew McCarthy, senior director of brand development for Axe in North America, said that marketing for Axe consistently takes “truths about guys and girls and attraction and finds interesting and relevant ways to bring those to life.”

Partnering with Mr. Aldrin and sending Axe users to space will resonate as “a timeless theme about heroes and men,” Mr. Kolbusz said.

Axe Apollo, which began appearing in stores this month, is being introduced as a scented line across a variety of grooming products, including body spray, deodorant, shower gel and shampoo. Most have a suggested retail price of $4.30, and shampoo retails for $5.40.

To enter the contest, which will be promoted in 60 countries in about 45 languages, contestants will complete what the brand is calling an astronaut profile detailing why they should be chosen. Based on popular votes, the brand will send 100 to 105 finalists from throughout the world to a space camp in Orlando, Fla., for three days of training and testing. The brand and expedition company will choose 21 winners from that group.

A 22nd ticket will be awarded directly to a United States resident in a sweepstakes from Jan. 9 through Feb. 3.

Click here to read the Original Article at NYTimes.com