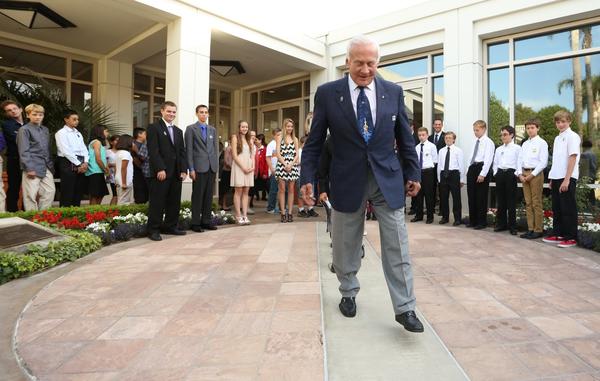 Dancer, rapper, and, oh yeah, Man on the Moon Buzz Aldrin is talking, but are the right people listening?

One of the original moonwalkers (“Michael Jackson always did it backwards!” Aldrin complained) challenged the United States to pick up the space slack Tuesday evening, mere hours after China sent three astronauts into orbit.

Speaking in front of a friendly crowd of 880 at the Richard Nixon Presidential Library and Museum in Yorba Linda, Aldrin criticized the U.S. for not adequately leading the international community in space exploration, and suggested that we bump up our federal investment in space while still encouraging the private sector’s efforts.

“It took a national effort of about 4% of our [federal] budget in the peak year to support the Apollo program,” he said. “We’re getting a half of a percent right now. We have a lot of catching up to do to get back to the top of the space transportation business.”

Aldrin was part of the Apollo 11 team that landed on the moon July 20, 1969, prompting fellow astronaut Neil Armstrong’s famous “one small step for man” line and raising even the prodigious eyebrows of Soviet Leader Leonid Brezhnev.

His current grand plan, sketched out in his new book “Mission to Mars: My Vision for Space Exploration,” calls for a U.S.-led international effort to build a series of incremental bases, starting with the moon, then moving on to Mars’ two moons Phobos and Deimos, and finally establishing a permanent base with human residents on Mars.

The key to Aldrin’s plan is to use a spacecraft called the cycler, which would transport people back and forth between Earth and Mars, surpassing even Los Angeles for commute time.

“Every couple of years, we could dispatch people from Earth to Mars,” Aldrin said.

Aldrin claimed the costs of such a project would not be astronomical, but admitted it is still unclear how it would all be paid for.

So what’s the point of going to Mars?

”If we don’t, the Russians will, the Chinese will, some other country will,” Aldrin said. “I grew up in a country that I thought was special. And it was.”

Prior to his speech, Aldrin spent half an hour answering questions from a group of 32 local elementary- and middle-school kids in the basement level of the Nixon complex. I had the chance to speak with him briefly in between appearances.

Sitting at a long conference table piled with signed copies of his “Mission,” Aldrin listened with alert blue eyes as I asked questions. Physically robust, with a ruddy complexion and broad shoulders that belie his 83 years, he wore gray slacks, a blue blazer, and several bracelets of different colors.

“What are the bracelets for?” I asked.

“They all have skulls on them,” he said in a tone scuffed with gravel. “They chase away evil spirits.”

I laughed. “Really? I couldn’t tell they were skulls.”

“Neither can the evil spirits,” Aldrin said.

That’s Buzz — a disciplined, measured man whose often-meandering comments are mixed with flashes of a very quick wit. When reminded during the Q&A that Pluto is no longer a planet, he shot, “Well, he wagged his tail too much.”

I asked him about the third guy on the Apollo 11 crew, the oft-forgotten Michael Collins. If Aldrin ever felt slighted for being the second man on the moon (Armstrong, the flight commander, got dibs), how must Collins have felt being marooned in lunar orbit aboard Columbia?

Turns out Collins had a year or two to prepare for any disappointment, as NASA officials established far in advance that he would stay in the command module while the others made history. I asked Aldrin if he thought it bothered Collins.

“Well,” he said, crunching a bite of salad, in the worst-case scenario, “he wouldn’t get left on the lunar surface!”

Note that Aldrin said “the lunar surface” and not simply “the moon.” With a doctorate in aeronautics and astronautics from MIT and a graduate of West Point, Aldrin is above all else a scientist and a patriot. Despite his good humor, his outlook is unsparingly no-nonsense. When I asked him for his first impressions upon landing on the moon, he launched into a wonky description of G forces and how they affect your balance and stability when trying to walk.

But that’s not Aldrin.

After landing, Aldrin and Armstrong either shook hands (according to Armstrong’s recollection) or Aldrin slapped him on the back (Aldrin’s take), but after their touchdown celebration that would make even Icky Woods proud, they turned to business.

“It wasn’t a moment for great reflection,” he said, “because things could be leaking.”

Only in the closing minutes of his speech did Aldrin reveal some vulnerability and spiritual insight, sharing that he had taken communion on the moon and that he struggled for years afterward with depression and alcoholism.

But Aldrin doesn’t seem too concerned with the past, except where it can make us better in the future.

“Where do we want this nation to be?” he asked no one and everyone. “What are our priorities?”

If NASA and the rest of Washington are listening, perhaps a FastTrak sticker for Mars won’t be such a fantasy after all.

Read the Original Article at the LA Times.