MISSION TO MARS: My Vision for Space Exploration

28 Mar MISSION TO MARS: My Vision for Space Exploration 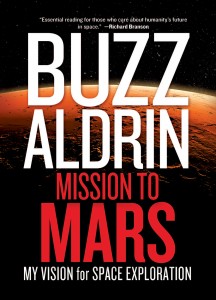 WASHINGTON (March 25, 2013)—In a new book from National Geographic, celebrated astronaut and bestselling author Buzz Aldrin boldly advocates continuing exploration of our solar system. In MISSION TO MARS: My Vision for Space Exploration (National Geographic Books; ISBN 978-1-4262-1017-4; on sale May 7; hardcover), by Buzz Aldrin and Leonard David, Aldrin lays out his goals for the space program and how he believes we can get humans to Mars by the 2030s, a vision shared by President Obama and one that is fortified by private industry and international cooperation.

In the book, which includes a foreword by Aldrin’s son Andrew, Aldrin makes the case and argues passionately for pushing our boundaries of knowledge and exploration of our solar system and presents his “unified space vision.” Aldrin discusses the history of space flight, including a reflective, not nostalgic, look at the people, technologies and steps that were taken to accomplish America’s Apollo moon landings, and plots a course of future exploration. He says “Do not put NASA astronauts on the moon. They have other places to go.” And he emphasizes that the path forward is not a competition; we cannot restart an engine to rerun a race we previously won. This is a controversial notion that causes significant division among astronauts.

In an interview, Aldrin can discuss:

Aldrin is honest in his critiques of space policy, discussing the economic, political, technological and other issues of viability of various options. It is a personal book in which he discusses his family, especially his father (whose impact on Aldrin is particularly striking); his own life, including his time in the Korean War; his initial rejection by NASA (he was one of the only astronauts who did not start as a test pilot, but as an MIT engineer); his eventual journey to the moon; and his hopes and frustrations. He even calls out large aerospace contractors for a lack of transparency with NASA and admits that he made a big mistake in the 1970s by not being more vocal about his displeasure with the initial design that preceded the Space Shuttle.

MISSION TO MARS uncovers an intimate side of Aldrin, while spotlighting some of the most important issues facing our nation’s space program today.

Buzz Aldrin, best known for his Apollo 11 moonwalk, holds a doctoral degree in astronautics and, at the age of 83, continues to wield influence as an international advocate of space science and planetary exploration. He has written three nonfiction books, two science fact/fiction novels and two children’s books.

Leonard David is a space journalist, who has reported on space activities for some 45 years. He is the 2010 winner of the prestigious National Space Club Press Award. Currently, David is SPACE.com’s Space Insider Columnist as well as a correspondent for Space News newspaper and a contributing writer for the American Institute of Aeronautics and Astronautics Aerospace America magazine.