Q&A: Buzz Aldrin on the Mars Cycler and poor funding for space exploration 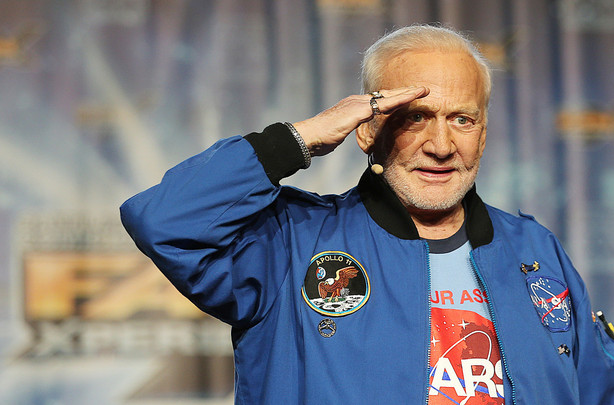 20 May Q&A: Buzz Aldrin on the Mars Cycler and poor funding for space exploration

Buzz Aldrin, moonwalker, author, and advocate for manned space exploration, discusses his Mars Cycler and a broken piece of plastic that almost prevented him and Neil Armstrong from leaving the moon. He will speak on Sunday at 7:30 p.m. at Highland Park Methodist Church.

Decades ago you came up with a concept for interplanetary travel called the Aldrin Mars Cycler. It uses the gravitational forces of Earth and Mars as a kind of gravitational slingshot, and would involve a spacecraft cycling between Earth and Mars indefinitely on very little propellant. You’ve been working with Purdue on to get the bugs out, correct?

Yes. We called it Cycling Pathways to Occupy Mars, and now it’s been abbreviated as just Cycling Pathways to Mars, CPM. I think that gets the point across, especially when there’s a definition of a cycler as being a spacecraft in a permanent orbit around one or more gravitational fields. The spacecraft arrives, gets things done, and then departs to do other tasks. You’d have a Cycler in low earth orbit, one in lunar orbit, and of course the two that will transport crew members and supplies to Mars.

Would NASA incorporate the Mars Cycler into their plans?

I certainly hope so. They’ve been informed of these in conceptual form, and they’ve appointed a group to make a more complete design. The study this year at Purdue concentrated on the lunar portion of the concept, and we’ll be combining those two into a completely integrated plan.

How do you respond to critics who say man has no business in space, since it’s so dangerous and so expensive, and that space exploration should only involve robots on unmanned missions?

There were parades for Al Shepard [the first American in space] and John Glenn [the first American to orbit the Earth], and I’m sure there were parades and celebrations in Russia for Yuri Gagarin [the first man in space, and the first to orbit the Earth]. But to my knowledge, there haven’t been any parades for a robot. The enthusiasm and the ability of a nation to inspire its people by adapting planetary objects and the space in between to the habitation of human beings is the sort of thing that civilizations have always dreamed of.

Serious space exploration costs a tremendous amount of money expended over a long period of time, so you’ve got to get the public enthused about it.

Just as a comparison, what percent of discretionary funds of the U.S. budget were the peak funding for Apollo, in 1967, to develop the equipment that was needed? Of course, it dropped by the time of the first landing, and further on down between 1969 and the end of 1972, when we had six out of seven missions that each sent two people to the surface of the Moon. Since that time, December 1972, there have been no humans beyond low earth orbit. That’s what we received for an investment, at the peak, of four percent. Over the last 15 years, we’ve been getting just one half of one percent. So it’s rather difficult to conceive of how we can do more ambitious activities further out at Mars and possibly over much, much longer periods of time there, up to permanent settlements. You just can’t do that with the space system right now, where the U.S. is being overloaded with three different costly activities, the International Space Station, the Orion spacecraft, and the Space Launch System.

One of my favorite stories in your book involves the circuit breaker you broke while you were on the Moon. You were trying to sleep on the floor of the lunar module, and you noticed a black piece of plastic that looked as if it had broken off something. It turned out to be important.

Yes, it had to be engaged for the ascent engine to fire so we could leave the Moon. There wasn’t a rewiring that Mission Control could determine that would fix that. I didn’t want to put my little finger in there, or a metal ball-point pen, but we did have a plastic felt tip pen. So I pushed it in and it tripped the circuits and springs and such behind it. Mission Control could tell that there was a completed circuit, so that when it came time for the computer to turn the engine on, it would do so. That took care of the job very nicely.

This Q&A was conducted and condensed by Dallas writer and book agent Jim Donovan. Email: jdliterary@sbcglobal.net